My flowerbed is an alien graveyard.

My brain was not cooperating with the whole writing thing today, so I did some gardening instead. Fresh air, soil, getting my hands dirty, nothing to think but be with the plants and worms. Good old physical labor and clean air.

Then I found these: 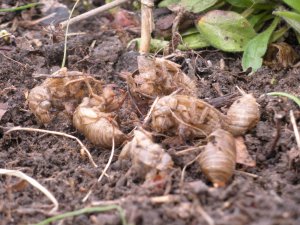 I hope they had a good life in the huge tree that shelters our house and in our yard that we let grow wild last summer. These little aliens now share a flowerbed with Irises and Daffodils, and an assortment of shade tolerant seeds including various Daisies, Foxglove, Poppies, Sweet William, and Blue Pimpernell among others. 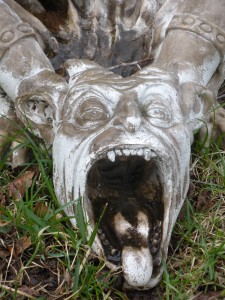 It’s only a gargoyle if there’s water running through it.

They and our home are kept safe by our gargoyle:

And here’s some spring color, because it’s not all death and dormant seeds: 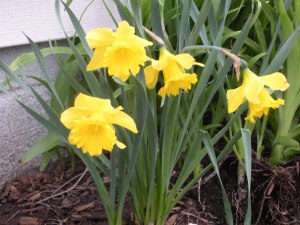 I am actually sitting outside right now and not freezing my arse off or risking electrocution. It’s been coooold and wet – wet I can understand, it is spring after all and rain is what spring is all about. But it doesn’t need to be so cold, and I do mean cold as it’s been ten to twenty degrees below normal temperatures and it’s still freezing at night.

But today blue sky is peeking out between the gauzy layer of cloud. Grackles, cardinals, robins, finches, and other birds are chirping wildly in their cacophonous glory. I think the Osterglocken (literally “Easter bells”, or, you know, daffodils) in our front yard will bloom soon! I had no idea we had daffodils. And there’s a few other things I don’t know what they are yet – maybe hyacinth! Mmm, those smell delicious.

Why am I telling you this? Because it’s glorious. Truly. I’m so excited by Spring’s

return. As many other animals clearly are as well. Some much more vocal about it that I am.And I’m telling you this because there is nothing to mention on the writing front. I’ve been unable to write well for a couple weeks now. It sounds a bit like I’m telling my doctor about a health problem I’ve been suffering. And in many ways it feels like it, actually. I get so grumpy when I don’t write… when I don’t write well that is, which is to say with a purpose whose fulfillment I’m actively and markedly working on.

I’m not making any progress!!! Waahhhh. Though I think the catnip seeds I’ve sowed have germinated… which is so cool. But it’s not me or my doing. I’m not germinating, damn it! Fallow. I’m lying fallow and Spring and renewal are flourishing all about. Maybe I should stop whining and enjoy the bounty 🙂 Refill thine vessel.

But I’ve this deadline of this evening for submitting a short story to Wiscon‘s writing workshop, which is a wonderful opportunity to have three or four other speculative

writers and a well-published pro critique my work – feedback is huge, people! It is one of the most helpful things. Practice (writewritewrite), of course, readreadread, and get feedback that’s not from your own little head. It’s energizing to get well thought out feedback and criticism. And I’m going to miss getting it (well, this year anyway) on one or two stories I’m working on that could really use the eyes of some intelligent, culturally and socially aware and literate individuals. Especially since there are characters who are PoC and I’ve only purposefully written characters who identify as PoC a handful of times, and none in stories that actually developed into something publishable.

I’ll complain briefly here: my drafts take too damned long to get through, not to mention the rewriting and editing (that’s an eternity within an eternity… okay little strong on the hyperbole); I don’t outline and I don’t feel I can outline without writing the stories to find out where they’re going because in order to think and explore I write and talk, not the other way around….. and I soooooo need to get over myself and this phony-writer syndrome. Because there’s nothing more annoying than listening to someone complain about how they suck and all when a handful of respected individuals who have nothing to gain by complimenting the writer compliment the writer and you know, actually read her work, enjoy it, and publish her. Yeah, I’m that writer right now. Humility is rarely in short supply, if you ask me, but that’s not what I’m talking about here. I’m talking about the self-effacing, keeping-myself-down attitude of self-doubt.

I’m going to transplant some violas and get my hands dirty. Have another cup of coffee, and realize that things are as they are right now, and I’ll figure out later this writing thing and this outlining and writing more effectively or efficiently thing… because right now, life is blooming all around me. Right now the sun is shining and the world is alive!

Here I am, 44,451 words into a story I think is crap and I don’t think it’s worth my keeping at it… Okay, the story may not be that bad, but it’s not good either. Nowhere near good, or okay, or even ‘you could read it if you had nothing else lying about.’

I’m stuck. I don’t know how the story is going to get to its end; that is to say, I don’t quite know what it needs to be considered finished. What I’ve got is close, but it is not an ending. And it doesn’t connect all the dots. And it’s trite. It’s full of shallow characters, who don’t all have names, and one of them hasn’t said anything (well, she has, now that I think of it, but it isn’t anything important) …

What I need to do, dear readers, is finish the story anyway. Regardless of what I may feel or think.  Why? because, one: I am so close to ‘winning’ this challenge, it would be silly to give up within sight of the finish line; two: the point of this exercise was not to produce an awesome fantastic completely edited and polished piece of writing (which is good, because what I’ve produced is so far from that); three: as many writers have averred, learning to finish is a difficult but critical lesson. In NaNoWriMo’s ‘Week Four Pep Talk from Brandon Sanderson,’ he wrote:

“The biggest jump in quality I made as a writer came in finishing my first book and starting my second. Writing an ending, then being able to look back and see the entire book, taught me more about the process than years of education, years of reading, and years of starting ever had. Finishing one book is more valuable than a dozen creative writing courses and a thousand books started. I’ve seen this time and time again in other writers I know.”

I’ll take his advice and push through this, finish my novel, even though I do not believe him… I do believe that finishing a novel IS transformative and highly valuable, and all those fine things Mr.Sanderson wrote, I just don’t believe that my finishing this novel will accomplish all those things.

“It doesn’t matter. Keep writing.” I do not have faith, but I will continue, anyway.